Andy Cooper of Leavenheath, Suffolk, and Nik Joplin of Holton St Mary in Essex, cycled LEJoG in 14 days in 2014 and raised ₤1,441 for East Anglian Children’s Hospice. Andy’s girlfriend dropped the two off at Land’s End in glorious sunshine but his low point happened on that first day when he fell off a sea wall, but carried on with scars to prove it! His high point was the kindness of a stranger in Glasgow who guided them out of the city. 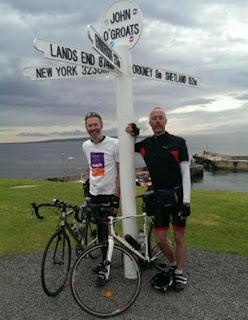 Andy then walked LEJoG in 2016 and raised ₤1,480 for Sesaw, an animal rescue centre. He covered 1,200 miles in 84 days, went through three pairs of boots, and said it was the wettest summer ever, and the midges bothered him from Yorkshire onwards!