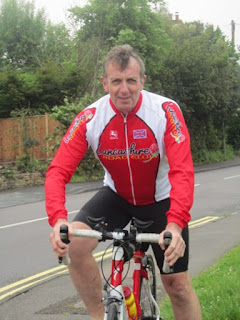 Tom Cartledge from Dormansland, Surrey, cycled JoGLE in June last year, raising funds for Alzheimer’s Society. He wrote, I felt that at the age of 52 I needed a challenge, and with this in mind I decided to ride from John o’ Groats to Land’s End. I completed my first 50 mile sportive in 2015, and on completion, I said I would never ride that distance again. However, I went ahead and organised a far bigger challenge covering over a hundred miles per day for nine days on my own. I decided to complete the journey alone as I just wanted time to myself. I had visiting support on some of the days but I mainly cycled alone. My main drive was the passing of my mother who suffered with Alzheimer’s. The worst day was Day Three: 132 miles with 85 of them in the driving rain! Other than that, I would do it again. Perhaps I’ll cycle south to north in 2017!
Posted by Katharine at 09:33