Membership Secretary Adrian Cole has celebrated his 100th blood donation at Southmead Hospital, and it’s his New Year’s resolution to get more people to step out of their comfort zone and make their first donation. Adrian, who is an Assistant Revenue Accountant at First Bristol Bus Company, started giving blood in 1989, following in the footsteps of his parents. After donating more than 23 litres of blood over 50 blood donations, Adrian switched to donating platelets to help children and adult patients who are unable to make enough platelets in their bone marrow as the result of leukaemia or other cancers, or their treatment. 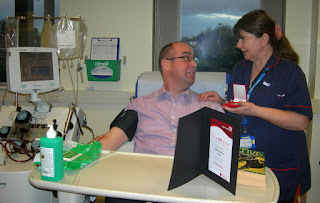 “I’m really thrilled to reach 100 blood donations. It’s amazing to know that doing something so simple makes a significant difference. You never know what the future holds; one day a loved one might urgently need blood. From an early age, I recall my parents giving up their time to make the effort to donate blood. That’s where it all started for me. Their generosity really opened my eyes to the importance of giving blood. I hope that more people decide to take up blood donation as a New Year’s resolution. It is quick, painless and saves lives.”

Each blood platelet donation can save the lives of up to 3 adults or even 12 children. Adrian, having given blood and platelets 100 times, has potentially saved or improved the lives of 1,200 patients. Out of the three per cent of the eligible population who give blood, just one per cent reaches 100 donations. The 90-minute procedure that Adrian does every three weeks involves the blood being withdrawn, mixed with anticoagulant to prevent clotting, and spun to separate the platelets. The remaining blood is then returned to his body.

People can give blood as long as they are fit and healthy, weigh over seven stone 12 lbs (50kg) and are aged between 17 and 66 (up to 70 if you’ve given blood before). Those over 70 need to have given blood in the last two years. If you’re inspired to give blood you can find out more about platelets and local donation venues by visiting blood.co.uk.
Posted by Katharine at 09:49