A Tandem or a Tricycle - Which Set a New Record?

This article is loosely based on two which appeared earlier this year in different issues of Cycling Weekly. The first was about an attempt on the End-to-End record for men’s tandem. It was entitled “No end to End to End tandem quest” and took place on the 4th/ 5th May.

The challengers were Glenn Longland, a no-nonsense long-distance time trialist and his pilot Dominic Irvine. They had planned their attempt meticulously and had worked out their precise route complete with timings. They were followed by a support team of several cars, helpers, timekeepers, a doctor and a photographer. Their tandem was custom-built by Orbit and Irvine had calculated the ride down to the last detail and estimated they would turn the pedals 250,000 times and each would burn 19,000 calories.

They left Land’s End at 6am on the 4th May and hoped to beat the 48 year-old record. However, after almost 26 hours of riding and 457 miles, their attempt came to a halt in a lay-by just north of Penrith. Fatigue and lack of compatibility had taken their toll. Longland collapsed on a grass verge in need of oxygen, a drip in each arm and a trip to the local A&E. Although both were good cyclists, they were not an effective team and with two riders more things can happen, right down to comfort breaks. The pair seldom picked up much of a tailwind and had to ride through chilling fog in Cumbria. Longland churned out the miles and stuck to his diet of a rice and fruit salad smoothie, Eccles cakes and sandwiches whereas Irvine, with all the technology aimed to ride the distance at a precise wattage of 240.

Therefore the record set on the 8th June 1966 by Pete Swinden and John Withers of 50 hours, 14 minutes and 25 seconds still stands even though there have been nine attempts to beat it, including mixed tandems, none of which has succeeded. Olympic rower James Cracknell tried and failed twice, once with Rebecca Romero and once with Jerone Walters. Although a tandem should go faster than a solo bicycle, the record for the latter is over six hours quicker. Gethin Butler set it at 44 hours, four minutes and 19 seconds in 2001 (before he continued, to break the record for 1000 miles).

The second account covered a new record set on the 7th August by 47 years old Jane Moore who became the first woman to set a record for riding a tricycle from Land’s End to John o’ Groats. She rode 849 miles in three days, 16 hours, 45 minutes and 12 seconds. Nobody had attempted this before and it was suggested to her by the father of Lynne Taylor who currently holds the women’s solo bicycle record. Moore was formerly an ultra marathon runner with a history of long-distance endurance events. Saddle soreness scuppered her plans to continue on for the 1,000 miles trike record but she is planning to try again and then do the 1,227 kms long-distance classic, Paris-Brest-Paris. Her nutrition tip: pasta, vegetable soup, peanut butter and jelly babies... The things people get up to! 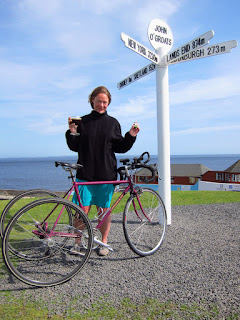