Ed: Dwight Wood and his son Lewis from East London cycled the equivalent of a return end-to-end last summer, taking a few ferries and trains along the way. It was intended as an educational tour, and also a way of giving Dwight's mother a virtual holiday to many of the places she'd visited during her life. Lewis wrote a blog, which his gran read and commented on as they travelled. The trip was planned to be 60 days and some 2650 miles, but they returned early due to Dwight's mum passing away. The realized journey was from Exeter, around the coast to Edinburgh, taking in LEJOG on the way.

Dwight wrote: “Although we raised money, (some people insisted), the idea was to raise awareness for the nationally-important Wanstead Park. 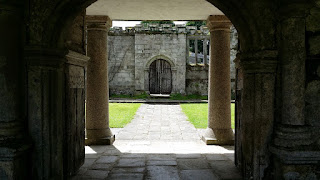 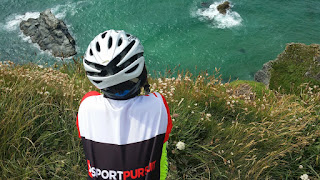 After lunch we continued on to Bude and came into Boscastle, where they had had one of the worst floods in Britain. You can see the video online. Around 6 miles from Bude we came across two 30% hills (very steep for bikes). Our first one had really slippery gravel on it so we had to walk up it, and the second one was fine, but a car came past. It was too narrow for both of us, so we had to walk. So that was really disappointing.

We took a ferry across the River Mersey and on the other side they we're having a parade! There were three huge string puppets: a granny, girl and a dog, although we didn't manage to see the dog. After that excitement, we had our first proper breakfast at a café.

We went to the Cavern Club which hosted the Beatles. In Liverpool we also saw the Grand National Horse Racecourse. There were some competitions going on for the horse riders, and those were nice to watch.

St Johns filling station and car repair, Withorn.
Blog comment from Alex:
This might be my favourite photo so far:
funny, weird and depressing all at the same time!

We made it to Port William and photographed a random statue of a fisherman we know nothing about. As we could see the rain coming in from the sea, we quickly cycled to literally the end house of Port William to our B&B. For dinner we went to a burger bar called The Streetery. The couple running it are really nice and are travellers. 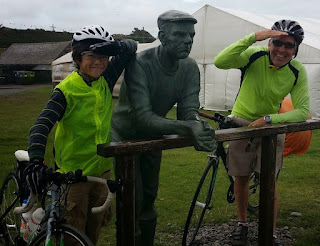 Lewis and Dwight on the sea-front, and
'A Fisherman' by Andrew Brown, 1999

4 August, Day 31, 37 miles from Port William to Pinwherry, Over Half Way

Today was a short day and our only stop was at Barhill, 33 miles from Port William, and there we bought a packet of sherbet lemons and a small circular pie each, so not much for lunch.

5 August, 57 miles from Pinhwerry to Isle of Arran, Disaster!

We cycled 18 miles and got to Culzean Castle, actually pronounced Calaine, so it seems like a weird spelling. Inside was big, and we waited till 11 for a one-hour tour. It has a massive armoury with over 700 pistols!

Next was the disaster. We were going up the hill and I was on my lowest gear but my bike gear changer felt like it could be pushed down, so foolishly I did, as it never lets me push it if I'm in my lowest gear. So... my derailer was raised to be above the chain rings and got caught in the spokes!

We stopped, and Dad told me to stand somewhere else while he bent back the derailer. He forced it back although the stopper has fallen off, meaning the chain is loose but still just functional. The thing is: I can ride, and we managed to go on. Dad was still a bit annoyed but able to laugh. We went to two bike shops along the way but they couldn't do the stuff we needed. We got to our ferry place and waited an hour for it to get to Ardrossan. It was one of those big ferries for taking lots of cars and trucks. We put our bikes in a bike shelter there and walked to the main floor. It was too foggy to see out the windows. In Arran, we only had to cycle up the road to our B&B.

We set off late, as we fiddled with the bike and took stuff apart, and while Dad did things on his phone I played with the rabbit outside our B&B. We cycled only 2 miles to Brodick Castle across the bay. Inside was like any other castle apart from how many deer heads there were hanging up: there were loads. We had a quick look through, and Dad took a few photos even though you weren't allowed. In a kid playroom, we saw a special piggy bank which is a man who drops the coin into a purse.

We waited in the café for the rain to pass, but then gave up and cycled in the rain instead. It was light, but when we got to our only hill for the day, which wasn't very big anyway, it was raining heavily enough so that when I stuck out my tongue, it actually gave me water and didn't just make it dry. Halfway up the hill the rain stopped, and I made it up in my 4 and 5 gear, surprisingly. We came over the hill and down the other side and saw the ferry straight ahead; that was lucky, as we came just on time.

On the other side, we were both feeling really hungry when we remembered we had a wrapped-up sausage. We had half a sausage each and a sherbet lemon to keep us going to Tarbert. We got there after about 12 miles and had a late, thankful lunch. Our place for the night is the same as our pub lunch. We went for a walk and saw some fishing ships which Dad was extremely interested in, so we went to look at those before we walked back to the hotel. Then, as Dad wanted an ice-cream, I got him one, walking through the rain to get it.

Ed: I'll include the second half of the Woods' journey in the next issue. You can see more on their blog,
Posted by Katharine at 11:08