Ed: We welcome Russell to the Association's Committee this year; he is acting as Assistant Treasurer, working with Treasurer Jeff Chambers. 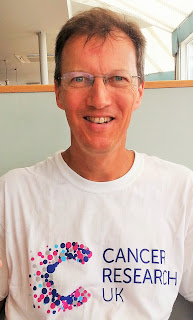 I became an Association member after completing my walk from John o’ Groats to Land’s End in the summer of 2013. For a long time, I’d wanted to follow in the footsteps (literally!) of Sir Ian Botham and the many others who had walked the length of Britain, but never expected to have the opportunity.

Then, after working for more than thirty years in the energy industry in a variety of senior finance roles, early retirement unexpectedly presented me with my opening to complete the legendary journey, so I grasped it with both hands and both feet. I spent several months planning routes and booking accommodation, before setting off from John o’ Groats on a warm, sunny June day. After a few difficult days in which I was troubled by a badly blistered toe, a roadside fall, excessive baggage and a touch of loneliness, I recovered to face the unexpected challenge of an extended heatwave from Lancashire as far as Somerset, before finally reaching Land’s End on Day 57.

Undertaking the walk also provided the chance to raise funds for charity, so I elected to support Cancer Research UK, a charity I’d run several marathons for during the last century. By the time I’d completed the walk from end to end, I was delighted to have collected donations of nearly £18,000 from my generous supporters.

Since completing the walk, I have published a book about my adventures on the road. This was not a pre-planned follow-up to the walk, but something which I was talked into by friends and colleagues who had read my daily blogs, which I had written to enable supporters to track my progress during my epic journey. As a consequence, much of the year following completion of my JOGLE walk was spent writing, and finding a publisher.

After all the editing, proofreading, designing a book cover and developing a website,
Posted by Katharine at 15:24