The Toorak with a Twist

During the 2014 AGM weekend, Janet spotted a poster offering an Agatha Christie Break in either June or September. We thought this would be good fun and tried to book when we checked out on the Sunday. However, the computer decided to say “no” and the poor receptionist was most embarrassed. Eventually she managed to phone someone who told her how to override the system and we reserved our places for June.

Finally the start day (Monday) arrived. After an enjoyable snack lunch at the Blue Ball Inn, we arrived at the Toorak and were given a very pleasant room looking over Torre Abbey Gardens.

We then went for a stroll into Torquay which was much busier than we normally see it. Janet remarked on how many mobility scooters there were, and this is from someone who lives in Bournemouth! That evening there was a drinks reception and a murder mystery dinner. We didn’t work out who dunnit so there’s no future for either of us in the CID.

On Tuesday, we took a bus and steam train to Kingswear and then a ferry to Dartmouth. After a look around and a welcome coffee, it was back by ferry and train to Cherston and then the bus to Brixham. The weather was now bright and hot and the boat trip across the bay back to Torquay was great. All this got us to the hotel in time for cream tea and a film about Agatha Christie. Much of the narration was by her grandson who spent many of his younger days at Greenway, and it was very interesting.

Wednesday was the highlight: we were collected by a vintage single-deck bus after breakfast for a ride through the lanes to Greenway. Then there was an excellent tour around the house and gardens and time in the café. We were told that if you arrive by boat and warn the captain in advance, he will radio ahead to Greenway and you can be collected from the jetty in a minivan taxi to save a long climb to the house! Finally it was back to the hotel on the vintage bus with a couple of diversions and extra commentary from the driver. 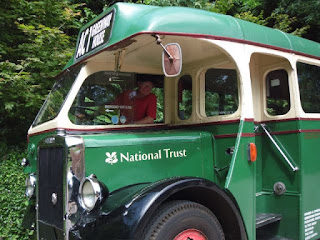 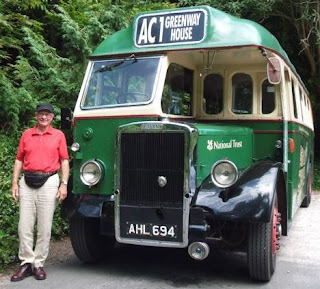 The bus is a 1947 Leyland Tiger.
The bodywork was built by Barnaby, and it’s the only one of its kind still in existence.

On Thursday we were given free tickets to the Victorian Museum at Babbacombe. We made our way there by bus and thoroughly enjoyed the museum. I only have old cars in the garage and model railways in the attic; I have not bought a full-sized steam locomotive and had to make a storage building around it! We also took a short walk to the model village which is amazing, especially the miniature garden areas. Then we took another short walk for a ride on the cliff lift (it’s been years since I went on one of those), and finally back to the Toorak.

On Friday morning it was time to go. We called en route at Bridport to see a family friend for a cuppa and a natter, and finally home. All a great success.
Posted by Katharine at 10:05