The Breakaway: My Story, by Nicole Cooke

For many years I have been a big fan of Nicole Cooke, undoubtedly the finest woman cyclist to have come from Wales and arguably the whole of the United Kingdom. I well recall watching her on television winning the road race in the Commonwealth Games in Manchester in 2002.

It was therefore a happy chance that I spotted a small paragraph in the Daily Telegraph reviewing her newly published autobiography and advertising a book launch on the 5th August at Waterstones in London Wall in the City timed for 12.30pm. As luck would have it, I intended going to a lunchtime recital at 1 o’clock in St. Lawrence Jewry, no more than five minutes away. Such an opportunity would not happen again so I left home a bit early in order to be near the front of the queue. Nicole arrived punctually and having bought my copy, I had a brief chat with her before she signed it with her best wishes and I headed off to the recital.

The Breakaway is over 450 pages long and I am a slow reader but on this occasion I read it in record time – for me! She writes of a remarkable cycling career and of the constant difficulties she encountered, mainly in the running and administration (or lack thereof…) of women’s cycling at the time, the dark period when drug-taking was rife in the sport, broken contracts and unpaid wages, and a chronic knee injury which perhaps deprived her of even more success than she achieved.

Nevertheless, her accomplishments were without parallel. They included the rare distinction of Olympic, Commonwealth and World gold medals, as well as being a ten times victor of the British national road race, the first of which made her the youngest-ever champion at the age of 16. She won more than 70 professional titles in Europe, North America and Australia, highlighted by twice winning the UCI Road World Cup in 2003 and 2006, as well as triumphing in the prestigious 2004 Giro d’Italia and being a two times winner of the women’s Tour de France in 2006 and 2007. She was ranked No. 1 in the world and appointed a Member of the British Empire (MBE) in 2009 for services to cycling. Nicole retired in 2013 at the age of 29.

This unique list of triumphs never really received the publicity and recognition she deserved, and certainly not financial riches as cycling at that time was largely a sport for men and run by men. There was far more coverage, for example, of the latest revelations of drug cheating by a man than a notable victory by her, though her televised success in the 2008 Olympic women’s road race in Beijing will always remain in my mind, as will news of her victory, only weeks later, in the women’s world championship road race in Varese which I heard on the radio in our bedroom just before going down to dinner in the Winnock Hotel at Drymen where we were staying for the Association’s late summer weekend. I felt elated at this news. These are merely the bare bones of her successes.

Only reading the book will give you her unqualified rejection of drugs and cheating in the sport, her condemnation of those who transgressed, her dedication – obsession, some might say – with the sport, her determination and highly developed competitive nature and her generosity of spirit towards her rivals. She was well aware of her abilities, and rightly so, but I did not perceive this as arrogance and am full of admiration for her. She was argumentative, certainly, but only when she considered she had just cause, and invariably she was proved right – and it was hardly her fault that for much of the time the organisation by the Welsh Cycling Union and indeed GB Cycling was no better than a shambles. If she ruffled feathers on the way, so be it. Luckily she had a tremendously supportive family particularly her mum and dad, and, when he was there, her younger brother Craig.

It is an inspiring story by a young woman who made the most of her gifts of great intelligence and physical strength allied to enormous perseverance, resilience, determination and courage that enabled her to reach the heights she so richly deserved. I heartily recommend it. Buy a copy of this frank and outspoken autobiography and read for yourself: how she left home at 18 to pursue her goals in Italy. It costs £20 and is published by Simon & Schuster 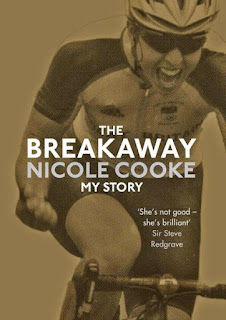