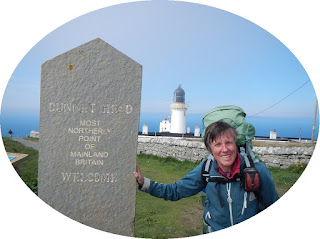 I became a member in 2013. I spent seventy six days and two rest days walking 1395 miles through mainland UK between mid-March and the end of May. I averaged 19.7 miles per day for the first fifty four days but overall dropped to 18.4 miles per day because I decided to carry equipment to camp if needed north of Glasgow. The long distance was partly because I actually walked from The Lizard to Dunnet Head via Land’s End and John o’ Groats and partly because I included the whole Pennine Way and wove between east and west to pick up footpaths. My account of “The Scenic Route” was included in Issue 83 of “Quo Vadis?” (Spring 2014).

I missed the Toorak Weekend in 2014 and was unable to attend even for presentation of my certificate. Although I live in nearby Exeter, I had inadvertently booked to work a Devon Doctors out-of-hours shift on the Friday and Saturday evenings. However this year the rota team was slow off the mark so the invitation to the annual dinner and presentation weekend arrived before the work rota was booked. I enjoyed a happy and interesting weekend in Torquay, meeting many adventurous and enterprising individuals who made the epic adventure from end to end by a myriad of methods. I was also co-opted to the Committee within hours of the amendment to the Constitution made at the AGM. I gather my name was put forward by Chris Hatton (Route Advisor), whose bed and breakfast in Porthcurno was an overnight stop for me in November 2010 when I walked the South West Coast Path, and again in March 2013 on the second night of my long walk.

I have worked as a locum and out-of-hours GP in the Exeter area since 2006 and am also a GP appraiser. Before we moved to Exeter, I was a GP partner in a practice in Evesham for thirteen years, apart from the one year I took a sabbatical and worked for Lerwick Doctors (Shetland). In my “free” time I’m a school governor, perform clergy reviews (a bit like appraisals for Church of England clergy) and run for South West Road Runners as well as trying to edit the running club newsletter. I will be running the London Marathon (injuries permitting!) for the sixth time this April with a good-for-age place. My best time is just under three and a half hours in 2011. This time I’m raising money for Whizz-Kidz – an amazing charity that provides tailor made wheelchairs to disabled children [Ed: See page 4].

I’ve been married to Adrian since 1986. We met at Oxford University in 1980 when we were both reading Chemistry. Adrian worked as a research scientist for several years after his Chemistry Doctorate, building a computer model of the chemistry of the lower atmosphere. However he has been a Church of England clergyman since 1992 and currently works as Chaplain and Episcopal Vicar to the Bishop of Exeter. Amongst his other talents, he masterminded a trip from Land’s End to John o’ Groats on B roads in 1994, planning a route and organising much of the fundraising for the charity now known as CLIC Sargent. Adrian travelled from end to end in a Mercedes van as part of the support team for a parishioner who rode his vintage motorbike from end to end in memory of his daughter who died of cancer in childhood. Adrian is also a keen photographer (LRPS) and is now putting together a travel-based portfolio to submit for ARPS.

Our daughter Rachel was born in 1996. She is reading Geography at Oxford University and has a particular interest in environmental issues.
Posted by Katharine at 22:19