Over and round the Wrekin


On Saturday morning, 31st January at 7.30, the Wrekin was bleak, wet and windy. Our intention was to do a run-walk training session. Tony suggested we do a 6 mile run within the Wrekin, off-road but flat, and good underfoot for me. So we took no packs, thinking we’d just have a slightly faster run to start, and then walk the Wrekin. Yes, flat were Tony’s words and good underfoot for me. The first five minutes were interesting: mud up to my ankles, puddles which I swear had fish in, tree roots and low branches, along with the odd rock or two, and a few slight slopes and rises! By slight, I would say they resembled the Grand Canyon!

We climbed a stile. I was wet, freezing and definitely moaning, and then we hit a good running surface, according to Tony. If this were flat, I wouldn’t like to play him at snooker - inclines down, and inclines up! I would say it was more like a small hill. Then we ran out of the good running surface and to stop me getting my feet wet and muddy (Who was kidding who? My trainers were now 10lbs heavier and there were fish in them too), Tony said “We’ll go up there.” “Up where?” I thought. Then hearing Dave Lewis’s reply and the way he said it, made me wonder, “Up there, Tony? You sure!?” So we started “up there.” It was rather steep, covered in snow, and my feet were sliding everywhere, but I was reassured this was the best option.

The hill got steeper as we carried on up, clambering over tree trunks and fighting the snow. When it became even steeper, Tony let go of my connecting running cord. Our feet were sliding every which way, and Tony said, “You’re on your own now. This hill’s not good for a blind man! I’ll just shout left or right.” I was also on all fours; it made for better climbing. Is the sand in the desert going to be this cold? My hands were freezing. Our “short, fast run” meant that we took no top coats and no gloves. “Out and back,” I was told and now I found myself impersonating a mountain goat. In fact, a rope, hammer and crampons might have been more in keeping. But we kept going up. I was frightened to ask how much further, but I did, and the reply came first from Tony: “Only 100 yards to go,” then from Dave Lewis: “Only 200 yards to go!” Which one failed maths at school? With the pair of them behind me, shouting instructions through laughter, I veered left, then right, but kept going up, and finally there was a hilltop. 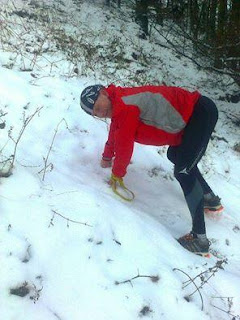 We were wet, freezing, with burning legs, but was I glad to feel the wind at the brow: low and behold, we had reached the summit of the Wrekin, the hard way! We did have a laugh at our intended 50 minute supposed run, and then we made our way down the other side of the Wrekin. With snow in places, the different terrain underfoot determined whether we walked fast or jogged. It was a mile or so down. Our intention was to put our packs on when reaching the car, and then walk back up again. How things changed this morning! Instead of turning left to the car, we decided to turn right and do a faster run around the Wrekin on the road.

After the first couple of hundred yards we warmed up instantly! A hill we normally come down, we went up, pretty quickly, with heart-rates up and even sweat on the brow, and there was definitely not too much chatter. Until the top. Then we ran our normal route round the Wrekin the opposite way. It still brings a smile when I think of the saying, “Round the Wrekin.” It was wet and slippery at times, but faster. After some three hours of running and walking it was nice to get to the car and sit having a drink in the warmth. As lovely as it is to get out there training, it’s always nice when you finish.

The day wasn’t completely over, the pain in my legs, body and hands was made worse by a visit to the Baggies, where we lost three-nil. Still, as I say: keep the faith, and we’ll all get there in the end. 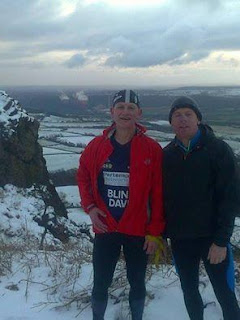