Training for the Marathon des Sables, MDS, is now very intense. We are running almost every day, cycling and walking. Although we intend to run as much of the event as possible, listening to many who have undertaken the event before, especially Tony one of my guides, there will be parts we will have to walk, as the terrain dictates. For the last few months when out walking with Seamus, my guide dog, I always have a pack on with around 10kg of weight, even more when the shopping is added! The goal is stronger legs, and using all muscle groups. Over the past couple of weeks we have introduced at least one day of walking the hills and valleys, carrying extra weights in our packs, and I have to say it brings up the heart rate!

We have walked the hills around Shropshire: up and around the Wrekin and Much Wenlock. These seem to be instant hills: we get out of the car, and a couple of steps later, you’re climbing hills! (I’d call them mountains!) In January I was rudely introduced to the Wrekin - the top of it - although a few weeks before then, we had run around it. There’s a good old Black Country saying, “Running round the Wrekin,” but I must admit I never thought I’d actually run round it.

On Sunday 18th January, we drove 80 plus miles to Helsby, to run a half marathon up there. However, after arriving and getting kitted up, we were informed the race was off due to the bad weather. Rather than waste a day’s training we decided to walk up the Wrekin. In fact, we were greedy - we did it twice. With packs, weights and heavy coats, we certainly added a layer of sweat, and the legs knew they had done some walking. I was surprised by how many people were around on a Sunday afternoon, and it’s amazing who you bump into! Half way down my name was shouted, and low and behold, another guide dog owner and her husband were there walking: young Tina whom I met many years ago in Leamington, whilst training with my second dog, Carla.

Tony was talkative, describing various sights and landmarks as we walked. At the top there was the obligatory tabletop sign, detailing the direction and distances of various towns. I didn’t realise West Brom was quite the distance away! The views were described to me as breathtaking; Tony could see for miles all around. 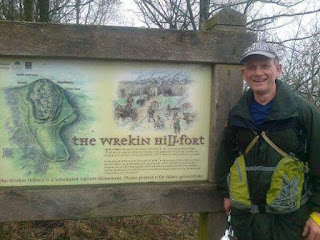 There is also a small structure at the top which is allied to giving a bearing when Ordnance Survey maps are calculated. Mind the difference in the weather between our two climbs: on the first as I said, it was clear for miles, but on the second it was so misty Tony couldn’t see past the ridge. The weather on our second descent also changed, from cool but dry, to snowing and freezing cold. With the surfaces underfoot also changing - grass to gravel, rocky and then soft - it was certainly an interesting climb.

Last week we ventured towards Church Stretton and Much Wenlock, attempting another couple of hills: the Lawley and the Caradoc. At 7am the weather was fresh and the ground somewhat frosty. We dressed warmly, and loaded the backpacks with 10kg weights, a sandwich and a drink. Because we were walking we took Seamus along with us, he doesn’t know it yet but he’s signed up for any walking! We headed for the top, and it was a good steady climb that got the heart rate up. Tony told me the sun was just starting to rise. 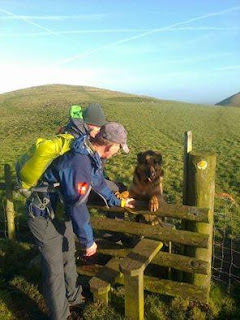 Towards the top, I found a steep icy patch, and with the weight of the pack and slipping feet, I went backwards. Being tied wrist-to-wrist with Tony, I pulled him along too. In a flash I had thoughts of the two of us going back down that hill, rolling over and over with feet, arms and legs flailing. As luck had it, we slid around 10 foot, and unceremoniously hit the ground. It all happened so quickly. Dave Lewis, Tony’s friend who was also walking with us, found it highly amusing, until Seamus, running behind him, caught the back of his legs and he also hit the floor. With all three of us down, at least we had something to smile about! We reached the brow of the hill without further incident. Away from the cover of the slope and suddenly exposed, the wind howled, strong and chilly. We walked on and over the top, Tony giving me a description of the views, once again breathtaking. Standing listening, I realised that 45 years ago I actually did my field study course from school in this district. I never thought I’d revisit and use these hills as a place to train for such an event. 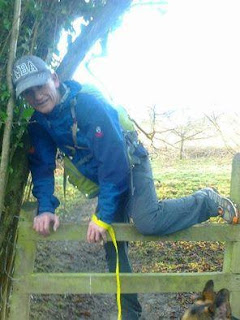 Reaching the top meant we had to go down the other side. It was steep, and slippery at times, and the descent is the part I don’t like too much as it gives my knees some pain. But if you go up, you have to come down. 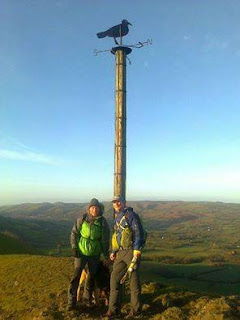 At the bottom we passed through part of the village of Much Wenlock. At this time of the morning it was quite sleepy; with the smell of log fires and the sound of flowing water, it seemed so peaceful and tranquil. We trudged up the road a little way and then began another climb, the Caradoc. Now the sun was up, the air fresh, a few more people were walking and also some running. We climbed. When crossing fields on this hill, we were confronted with stiles, a couple of which Seamus easily got over or through. However, the final one which would have taken us to the very top, Seamus would not for any persuasion go over, so Dave Lewis continued the 200 yards to the top, and Tony and I waited with Seamus; I will get there next time. 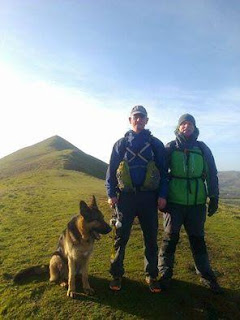 We started back down the Caradoc, back through the village and up the Lawley with no more incidents, just a lot of heavy breathing, and legs beginning to feel they had worked hard. We spent a good few hours over there with the hope that it would all be worth it. Once again, it’s amazing who you meet on these occasions: at the top of the Lawley, having a couple of photos taken with a monument, a chap began chatting about Seamus. It turns out he is a puppy walker for guide dogs and so conversation started.

He then, as a local, went on to give some history about the surrounding hills, in particular the Caradoc. Back when the Romans invaded there was a battle at that hill and the Romans won. They took the King or leader, who was called Caradoc, back to Rome, and because he fought so courageously, they named the hill after him. If true, I don’t know, but one thing I must say is I’m glad I didn’t come across any soldiers in those days. Fighting and climbing these hills, they must have been fit lads!

As always, it was a fruitful morning’s training, but whether we’re running or walking, the best part is when you’ve finished and you’re sitting in the warmth of the car. Regardless, there is a lot more training in front of us until we depart for the desert on 3rd April.

Editor’s note: Dave’s guide was right: The Battle of Caer Caradoc was the final battle in Caradoc’s, or Caratacus’s resistance to Roman rule. Fought in 50AD, the Romans defeated the Britons and secured the southern areas of the province of Britannia. Caradoc escaped, and fled north to the lands of the Brigantes (modern Yorkshire) where the Brigantian queen, Cartimandua, handed him over to the Romans in chains. In Rome, he gave a speech to the senate which persuaded the emperor Claudius to spare him and his family.
Posted by Katharine at 07:08