Map of a Nation: A Biography of the Ordnance Survey, by Rachel Hewitt 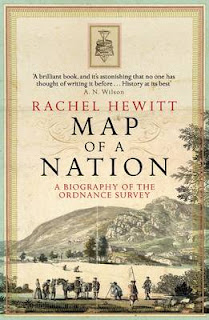 Whatever means we have used on our end-to-end travels, no doubt we have all spent many hours beforehand poring over Ordnance Survey maps or maps derived from the OS system, and trying to work out the best route. In fact, one joy of travelling through Britain is the reliable and consistent mapping with the easy availability of maps, from the 1: 25,000 and 1:50,000 maps favoured by walkers or cyclists, to the 1:110,000 maps more suitable for those on speedier transport. Nowadays there are also of course a plethora of electronic versions available to download to PCs and mobile devices.

However this ready availability of high quality mapping covering every mile of the nation builds on remarkable stories involving what was ground-breaking science alongside physically demanding feats of endurance on the part of the early mapmakers. Rachel Hewitt tells this story right from the early days to the completion of the First Series, then brings us up to the present day in a readable yet well-researched and carefully-referenced account.

The original maps were made for military purposes, and there could have been little idea of the myriad uses of today’s successor maps, notably tourism and leisure activities. The story begins even before the realisation in 1745 at the time of the Jacobite Rebellion that a complete and accurate map of Britain was needed for military purposes. In 1766 the King was petitioned to set up “a General Military Map of England”. In 1784 some work began collaborating with the French to form a Paris-Greenwich triangulation with a baseline measurement on Hounslow Heath.

Rods of wood expanded and warped, so they were exchanged for twenty-foot glass rods manhandled by uniformed soldiers, and used to form the baseline. Visitors to watch the undertaking included King George III. The next problem was to build an accurate theodolite. For various reasons this highly intricate instrument was not available until 1787, measuring three feet in size and weighing 200lb as well as having its own thirty-two foot scaffolding. It also needed exceptionally clear weather conditions to identify trig points many miles away, so progress was slow.

The Ordnance Survey is generally believed to have truly commenced in 1791 when the Master-General of the Army’s Board of Ordnance appointed three employees to the task. The baseline measurement on Hounslow Heath was repeated, giving a result 0.3845 feet less than the original attempt, due to a failure previously to compensate for temperature change. The new team used an improved “Great Theodolite” but of similar weight and dimensions. Progress continued to be slow, involving surveying in difficult terrain. Buildings and other obstacles impeding free measurement, as well as adverse weather including fog and the phenomenon of “terrestrial refraction,” with the atmosphere acting as a prism and bending rays of light to produce mirages.

This was just the south of England, so small wonder that with multiple interruptions and setbacks the First Series including all of England and Wales was not complete until 1870 when sheet number 108 of south-west Northumberland was published and each sheet retailed for 2s 6d. By then of course the earlier maps were out of date...

The book also explains the difficulty with accurate spelling of place names, particularly in Wales where the position was complicated in some areas by English and Welsh being spoken side by side. As for mapping the remote areas of Scotland, the physical challenges included reconnaissance marches of an average thirty-nine miles per day - as the crow flies and not on footpaths - relaxing to twenty-seven miles over more prolonged periods of triangulation. Even Chris Hatton doesn’t usually walk that far in a day!

In summary, this book is well worth a read for anyone who uses Ordnance Survey maps nowadays, to realise what a huge mentally- and physically-demanding undertaking underlies the map system that we often take for granted.
Posted by Katharine at 15:24