Keep the Sea on the Right: Walking the South West Coast Path in Winter 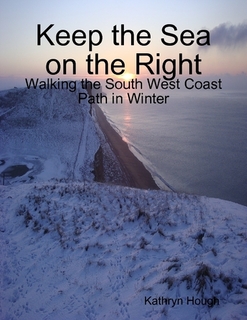 At the age of fourteen on my first youth hostelling holiday, I saw the start of the South West Coast Path. Almost immediately I decided that, impossibly long as it seemed, one day I would walk along all 630 miles of it. Thirty five years later I eventually achieved that ambition after setting out near the end of 2010 and reaching South Haven Point on Sunday 12th December. Of course I have now also walked 1395 miles in my scenic route from The Lizard to Dunnet Head via Land’s End and John o’ Groats – but that is another story.

This book tells the story of my thirty-nine day walk of six hundred and eighty seven miles along the South West Coast Path in winter; the walk included extra mileage around many estuaries because the ferries were not running. Having thought about it on and off for thirty five years, the timing turned out to be particularly poignant because, while I was undertaking my journey, my father was terminally ill and he died the day after I walked around his childhood home of Portland. He followed my walk avidly for as long as he was able with a daily postcard that I sent and I also made some journeys home to Keynsham to visit him. I was with him when he died and then returned to the path and completed the walk in the time before his funeral.

It is a tale of my journey as I trudged along the path meeting people who were delightful, helpful, eccentric and grumpy as well as the assorted accommodation owners (including LEJOG / JOGLE Route Adviser Chris Hatton!) and staff. It is also a celebration of the wonderful and varied coastal scenery of the south west of England. In addition it tells of my frequent difficulty to complete my walk in the limited daylight hours and my struggles with the elements, in particular strong winds that knocked me off my feet, catastrophic flooding in Cornwall and even two days of walking through snow. This is intermingled with my thoughts and emotions regarding my father’s final life journey as he faded much more rapidly than the medical teams had initially predicted.

Keep the Sea on the Right is dedicated to my father and also to Professor Kieran Sweeney, a GP with whom I worked until he became ill in 2008 and subsequently died with mesothelioma in December 2009. When Kieran became ill very unexpectedly and prematurely, it was a warning to me not to put everything off until retirement – just in case that day did not arrive. I am donating any profits from the sale of this book equally to Dorothy House Hospice whose community team helped with my father’s care, and to Exeter Hospiscare.

The book is available to download onto eBook readers here. It is priced at only £1.99 of which over £1.20 is profit that I will be donating equally to the two hospices. A link on this site takes you to the iBookstore from where it is also on sale with a similar profit margin. Alternatively, go directly here.

Please consider buying it. Not only will you be helping two wonderful charities, but you can also read about all the escapades and adventures I had during my walk.
Posted by Katharine at 15:14