On the 21st November 2014 at 6am, Tony, one of my guide runners, picked me up and we drove towards the Breckon Beacons. Our intention was to complete a training run of around 23 miles, up and over the Breckons, in preparation for next year’s Marathon Des Sables event. We pulled in to the car park of the Tal-y-bont Community Centre and despite having checked the weather forecast the previous evening and read that it should be a dry, cold day, it started to rain! Kit on, including wet weather gear, we began our run at around 8:30, off the car park and onto the canal tow path. The tow path would take us 2 miles, then we would turn right and hit the Breckons; we were not disappointed!

We weren’t even a mile into our run when suddenly the strap on Tony’s backpack snapped; not a great start, as the packs carried food, drink, spare gear and importantly: a 5 kg weight, simulating the packs we would carry in the desert next year. With the rain now falling quite heavily, we tried in vain to fix the strap but it wasn’t to be, so we trudged on regardless, what had to be, had to be. The hills that faced us certainly lived up to Tony’s description: steep! We climbed, running where we could and walking a great deal. The idea of the day was: strength in the legs. We went up! And up! And up again! We passed through and over many farm stiles, the land levelled, and just as I caught my breath at times, it went up again. It seemed an eternity climbing that mountain! (Well it seemed like a mountain!) The top was a relief, but then mixed with the heavier rain came the wind. The top held no shelter: the wind was fierce, strong and biting, and our bones seemed to shiver. 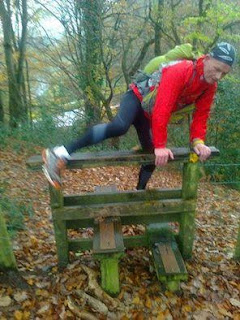 Dave on a slippery stile

Coming down to me was worse than climbing up. It was steep, and my legs were in permanent brake mode. I was literally climbing down the hill, more stumbling than walking, and certainly not running. My legs were screaming at this point, and welcomed the valley floor. 7 miles and 2 hours into our trek we actually had a good running surface. My legs, body and mind welcomed it - such a relief to actually run. But the running was short lived! The climbing began yet again, this time not quite so steep, and in fairness it gave us an opportunity to walk and get food inside us: wet and soggy sandwiches, but who cared? It was fuel!

This climb was rockier, dispersed with gravel, slightly awkward underfoot but at least it led on to another bout of running on tarmac road, bliss! It was at this point we came across some army vehicles; we guessed there was some manoeuvre going on. We stopped to ask if they had anything we might be able to fix Tony’s bag with - sadly not, but it gave us a breather and the opportunity for a couple of photos. I did think about a lift, but the offer never came, so we trudged on. 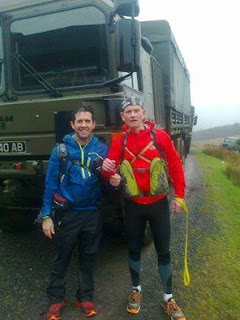 Tony and Dave by the army vehicles

The tarmac took us on for about another mile, and then we once again hit a rocky, uneven surface, with rolling rocks as I called them, taking our feet every which way. It could have been a recipe for disaster. Tony said we had a few miles of this, first a long incline up and then 3 miles down! It was at this point we encountered the soldiers coming back from their own trek. The first chap Tony said was looking strong, carrying pack and weapon, and he gave us an enthusiastic greeting. Over a period of an hour we were passed by some 200 soldiers, and although I’m guessing they are very fit lads, it was quite surprising the different fitness levels for fit men. The distance between the first- and last-placed soldier was almost an hour. The continuous hellos from them kept our minds occupied.

We hit the top of the incline and once again Tony wasn’t wrong! The 3 miles that followed were a rocky nightmare, with moving stones, rocks, streams, the wind, the rain, and my chilled bones. I was so glad to reach the bottom, although then, for about half a mile, we followed what I can only describe as a nature-made trench, a foot wide and filled with rocky boulders in parts. It was a case of my hands on Tony’s pack and following, carefully!

We eventually hit a gravel road, soaked, tired, but pleased to be able to run; at least it gave us the opportunity to warm up. We then moved on to farmland. We followed the fields, through many gates, over stiles, through mud and ankle-deep streams, through a wooded area and then an actual road, and once again what I call proper running, with only 4 miles to go to the carpark and the car! We ran through a small village and up and over a stinker of a hill, with not a car passing us and not another person in sight. The rain was now relentless. Over the brow of the hill, we turned left onto the canal, my spirits rising slightly as Tony told me it was just 2 miles to go. I splashed my way down that tow path, Tony running on the grassy bank and as he stated there was only room for one in the continuous puddles - that was me! Wet feet, cold feet, but every step was a puddle closer.

After 23 miles and 6 and a half hours , touching the car was wonderful. 30 minutes later we were in the local pub, hogging an open fire, holding a pint, and eating home-made cottage pie that was fantastic!

Dave is raising funds for The Albion Foundation. You can donate here.
Dave also has a YouTube channel, and you can see one on the Tri Albion Challenge here. 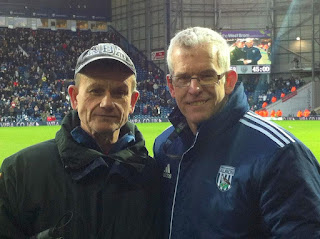