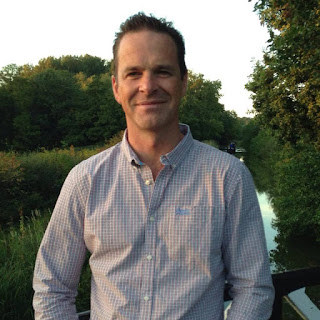 Craig Lincoln contacted us to share the adventure of his late father, Alan, who broke the LE-JOG-LE driving record in 1970. He writes, “Basically my father, his brother and a friend drove the round trip in a Ford Cortina that had been prepared and tuned by a local garage, doing the round trip in less than 30 hours.” I have transcribed the original press clipping from the ‘Packet’ Newspaper, and included photographs provided by Craig: 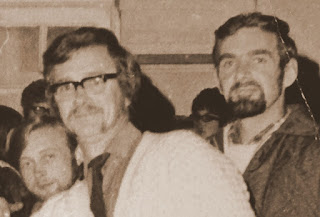 Les, Alan and Norman at the end of their trip


They left Land’s End at 8pm on Saturday evening in a Ford Cortina 1600 GT which had been tuned and prepared by Mr Andrew Smith, of Dover Service Station, Connor Downs. The attempt was sponsored by the Texaco petrol firm in aid of charity. 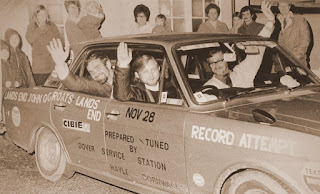 Left to right: Craig’s uncle: Norman Frogget, Les Deakin, and father: Alan Lincoln, setting out. Behind the car is Craig’s mother (with dark hair), holding Craig as a child.

The three men had a very good journey up to John o’ Groats, though they very nearly ran out of petrol. They had planned to make their first fuelling station on the motorway but unfortunately the station closed at 11pm. As a result, they had to drive into Birmingham to find an open service station.

They crossed the border into Scotland at 3:25am and arrived at John o’ Groats at 10:05am. Once again they had to contend with the problem of refuelling; nothing was open and there was nobody up to meet them. Despite going into a ditch in Scotland, the three men arrived back at Land’s End at 1:41am on Monday morning, tired but triumphant.

Their average speed was 59.7 m.p.h., but they did not break this record by shattering every speed restriction between Land’s End and John o’ Groats. As Mr Andrew Smith, who has himself done quite a lot of rally driving, told the ‘Packet’: “It is possible to adhere to the speed limits all the way and still break the record.” He added: “Had they been able to collect petrol where they originally intended, they could have knocked considerably more off the record.” 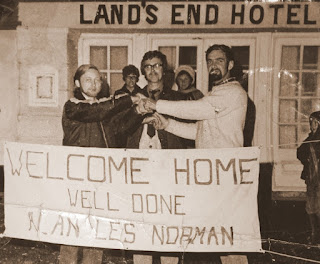 Les, Alan and Norman with their banner of Congratulations 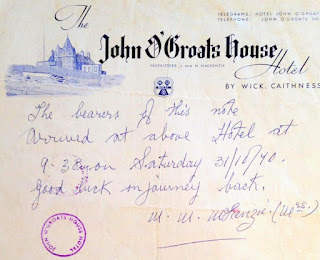 The letter of arrival from The John o’ Groats House Hotel

Mr Les Deakin said that now they have got the record under their belts, “we’d like to get into something bigger.” The ‘Packet’ asked Mrs Alan Lincoln and Mrs Norman Frogget what they felt about their husbands’ venture. Mrs Lincoln said: “I’m glad it’s over from the point of view of them getting home safely, but it was very exciting and I would like them to try something like it again.” Mrs Frogget echoed these sentiments.

All three men expressed gratitude to Andrew Smith for having prepared the car so efficiently and to all the people who were at Land’s End at both the start and finish of the run.
Posted by Katharine at 01:49