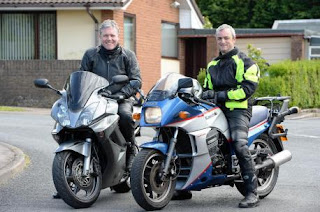 Ed: Jamie is 41, and a senior manager for the NHS, from Chepstow in South Wales. Jamie and Paul's 4-day, 4-corners ride aimed to raise £6,000 to be split between three charities, and also increase awareness for the work the charities do.

We began by thinking that we’d spend a week on the Isle of Man watching the TT [The Tourist Trophy Race was for many years the most prestigious motorcycle race in the world.] Who’s we? Jamie Methuen and Paul Burley. I’m a new biker having passed my test only 3 years ago, but Paul has been riding for over 20 years. Paul rides a 1985 Kawazaki GPZ 900 and I ride a Honda VFR800 which is a more recent machine - built in 2008.

The IOM TT proved a no-go but with the time off booked, and a touring itch to scratch we set about a good bottle of red and a map of the UK. It didn’t take us long to think LEJOG, and the same evening we called Jack Adams. Jack inspired us to plan a JOGLE journey with a twist: his suggestion was to visit the four most extreme points, a journey of around 1,500 miles, which hadn’t been done by motorbike from north to south.

And so the planning began. We both try to support local and national charities by various methods and it seemed right to put fundraising at the heart of this endeavour. We chose the Teenage Cancer Trust, Care for Casualties (Army) and a local special school, Heronsbridge School Bridgend, as beneficiaries of the journey. To make it more of a challenge, we decided to attempt the four corners in four days. The following months included route planning, accommodation selection, practice rides of increasing duration, putting up a website 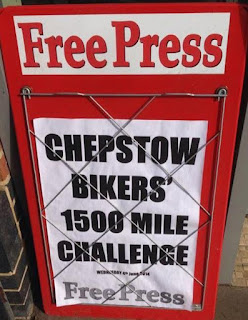 We had some good publicity in the run up and our bikes carried the names of some corporate sponsors. On 7 June at 15:00 we set off on what we called “the positioning leg,” a straight run from Chepstow in South Wales to Stirling for our first overnight stay. We arrived at the bar of the town centre hotel (they had the beer waiting on the bar for us) at 23:45 having secured the bikes after a 386 mile run. Sunday dawned showery but mild and we took a lovely run up through Inverness and some stunning scenery and the National Park. On then to Thurso, to a lovely B&B and a friendly landlady who took us into town for dinner. Returning to the B&B we were struck that this far north, darkness never really sets in. 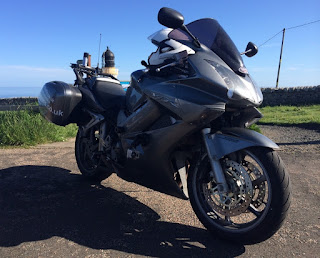 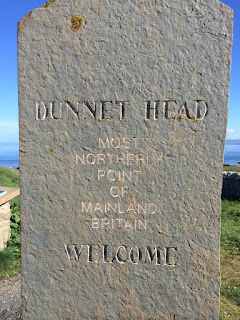 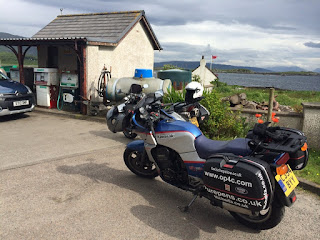 <icarushines.co.uk>. We finally fell into bed around midnight having been on the road for 12 hours plus, and ridden for (according to my speedo) 499.6 miles. 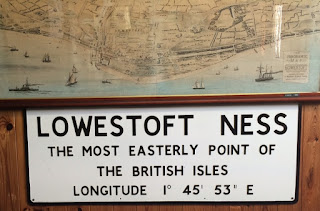 We pulled in after a short 'tour' of the area looking for a star located in the concrete overlooking the coast - it's a fairly bleak and uninspiring place. We noticed that we were closer to parts of Europe than we were to home! In the local maritime museum our story was met with enthusiasm by the local volunteer staff who stamped our book and bade us bon voyage. Off to Norwich where a suitable tyre for Paul's 'vintage' bike had been located. Whilst the bike was sorted we located some good coffee and I updated our tweets, Facebook messages and rough journey stats. 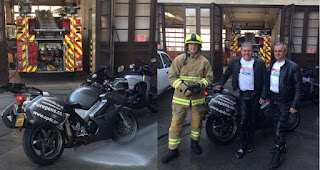 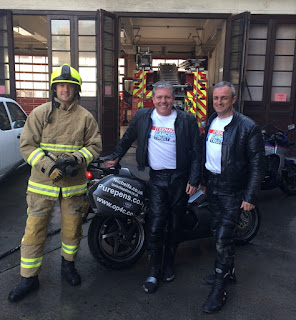 With the exception of the stop in the highlands cafe, we hadn't really admired our surroundings.

A little after 9 we set off from BH25, heading west with the sun on our backs. We had a loose plan to stop off at Jamaica Inn, although I'm not sure how Paul thought he was going to navigate us there - I had the GPS (a last-minute thought to replace the packet of paper maps I'd printed out - good call!), and he was having to cope with an increasingly unreliable speedo since the 'fitting mistake' in Norwich.

We set off towards Exeter and then south west aiming for Lizard (the most Southerly point in the UK). As we approached Lizard I could smell aviation fuel, and looking skyward, I noticed a HAWK trainer manoeuvring at about 1000 ft, meaning we were close to RAF Culdrose. The view of the airfield and the coast made for a pleasurable 10 minutes as our journey towards Lizard closed down. The last few miles of country lane led us to a gravelly car park on an incline just up from the Lizard National Trust visitor centre.

I was absolutely shattered, and looking at the way Paul eased himself off the bike, he was too. Paul had entered the car park ahead of me and I watched him gingerly negotiate the uneven gravel surface. Bikes are great when they are upright and moving but try moving one around under your own steam on a loose surface. I almost gave up and parked at the top, but pride got the better of me. As I came to a halt the VFR showed its first sign of displeasure. We'd encountered slow traffic coming through the village and engine temperature was up to 105 degrees as I edged down the cramped slope into the overfull car park. The cooling fan and the engine were coughing as the outside air temperature moved to 25 degrees.

My needs were basic: icecream! So I dispatched Paul to find someone to sign off our log book whilst I found some change and set off in search of calories. Paul was nowhere to be seen so I wandered down the path and bumped straight into him. He introduced me to the local NT warden who wanted to know all about the trip, and offer us a seat in his cool hut. So, we'd achieved our ambition of visiting the 4 most extreme points of the UK - but our trip wasn't over yet. In order to complete the LEJOG challenge we had to check in at the Land's End visitors centre. I could have happily laid back on the grass at Lizard and let the hot summer air wash over me, but we knew we had an evening engagement and we had at least an hour's ride ahead.

We made our way following signs for Land's End, rolling in around 16:30. We were surprised by the somewhat insincere look of the place, although I'm not sure quite what we were expecting. A quick conversation with the hotel reception, and we were directed to ride our bikes down toward the official sign post for a couple of quick photographs, and some texts home to let family and friends hear our news.

In all, we'd been on the road completing the challenge (so excluding the positioning ride) for 4 calendar days, over 8 hours per day.

The sense of completing an adventure, the time away with a good friend
Achieving something special
Helping charities
Seeing parts of the UK for the first time
Arriving safe and well at every location

The dawning realisation that the expectations of our own schedule left little or no time for sightseeing, and every night we'd be dog tired. One cautionary note too: the roads to Adnermurchan are far from easy to navigate even on a narrow motorbike. You should allow yourself double your estimate and then add a margin to that on top.

Observations on the 4-Corners Route

I've mentioned the roads to Ardnermurchan, but they're worthy of a reminder - they really are very narrow, barely passable by 1 bike and a car. The surface, while good, collects a lot of debris which on a motorbike turns the road into the equivalent of riding on ball-bearings. I had a brief excursion into the heather, which on a bike weighing over 240kg, out of balance with panniers, was my least favourite biking experience to date.

The scenery at Dunnet Head on a good day is amazing. Get there early to avoid midges and crowds, and breathe in the Scottish air. I'd start at Dunnet Head first - you're not going to get anyone to sign your logsheet because the lighthouse is automated and the old lighthouse keepers' cottages are now private residences. We took a photograph which was auto-date-stamped. Go from there to John o' Groats where, if you time it right, you'll again beat the crowds, and in between ferry departures, the local ferry office will stamp your sheet with a pleasant smile.

The reality of roads is that in Scotland, at least the Highlands, everything resembles a 'non-motorway' and you should take your time to see the sights, especially north of Inverness. There are some lovely motorbiking routes, and if I did this again I'd probably take 3 days just to do the Scottish leg. We popped into Thurso for evening dinner before setting off. It's a town dominated by the nuclear industry, where, in the summer months it rarely gets dark. There is some lovely scenery along Fort William, down past Loch Lomond, not to mention through the Highlands. Once you get close to Glasgow, it's far more motorway oriented. We had to deviate from our 'non motorway' plan at this point to pick up time, so again, if you want to stick to "non-M" you'll need to factor in time.

The A1 down through Yorkshire is a bit of a conundrum. I drove this many times when I lived and worked in the North East. It’s fast, dangerous, clogged, but quite beautiful in places. I think on reflection, we should have avoided this road.

If you are riding a bike, and its not a 'sit up' variety, your neck will began to hurt mid way through the second day especially if you have ridden up to start your challenge. Whatever you do, factor this in by either adjusting your handle bars with risers, taking time off the bike or booking a massage.

Be prepared to be underwhelmed by Land's End. Take your photos, raise a glass, and get the heck out - we rode to Newquay to meet some friends for a celebratory bash.