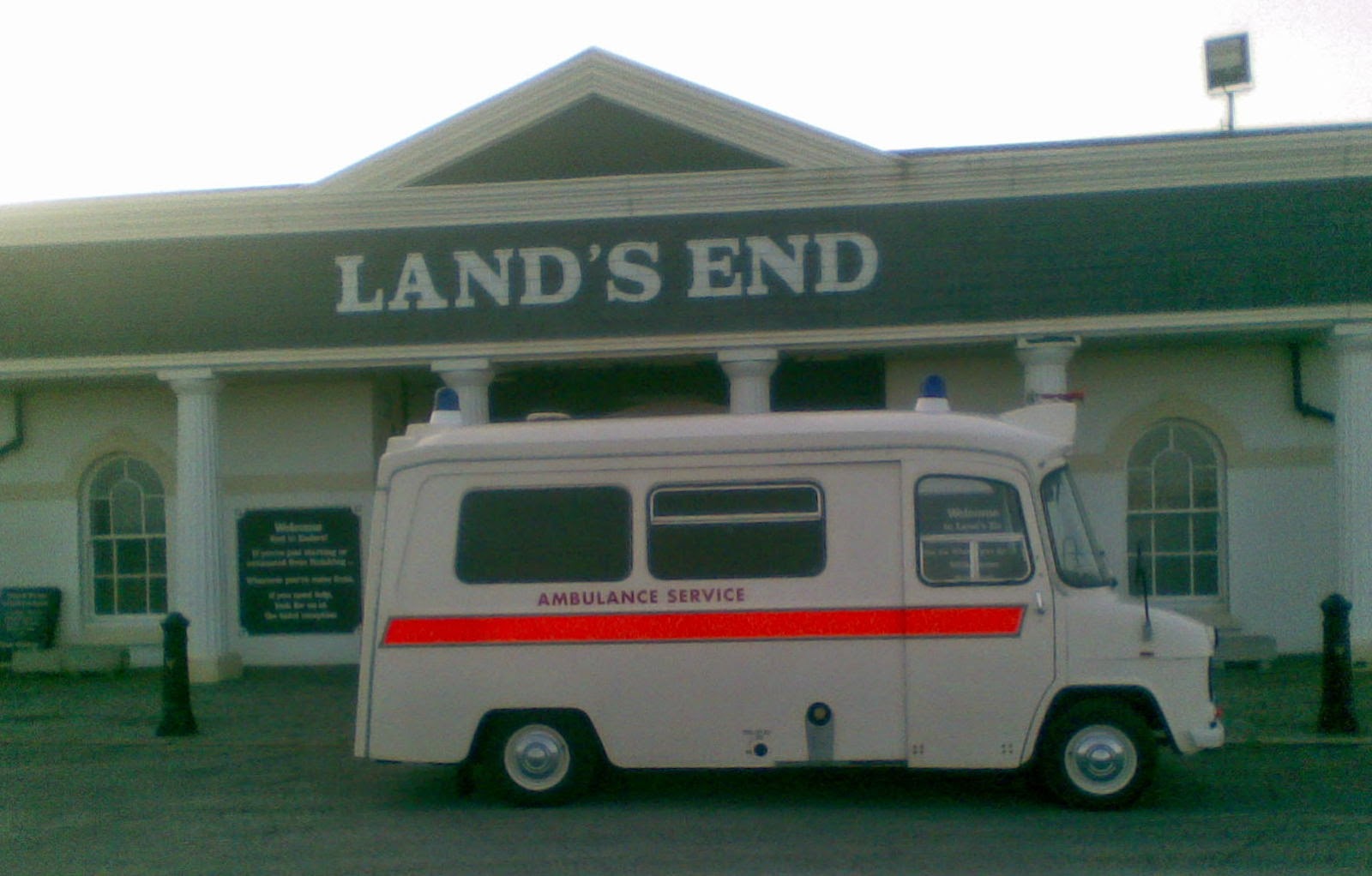 After completing the first challenge successfully of driving a vintage fire engine from Land’s End to John O’Groats and back, the fumes, concentration and the constant threat of breaking down in itself would put most people off attempting to drive vintage vehicles from one end of the country to the other and back, again. But to make up for all that I took great comfort in the people I met on the way - so kind, helpful and willing to assist you on your way. Thanks to the like-minded people who relish the challenge and shared their experiences, I decided to complete the challenge.

I started to look around for a vintage Ambulance, but finding one was not easy. Most were either converted into mobile homes or ice-cream vans and the rest were in museums. There were a few in private hands but they were not for sale at any price. It was only by chance I stumbled across an advert “Ambulance for hire” on the net. It was about the right age, and being used in the filming industry. I rang the gentleman hoping to hire it and as luck would have it he had just decided to sell it that week, so I bought it there and then on the phone.

That was October last year. It took me about three months to go through the engine and all the working parts so that I was confident it had a chance to make such a long journey. Once that was completed it was just a matter of timing time off work and the weather, so I decided to do the first part from Bridgwater to Land’s End and back over a weekend to save holiday from work, leaving on Friday night and hoping to be back Sunday afternoon. I waited and waited but it was not until March that the weather was good enough to go.

The first leg of the journey was non-eventful. From Bridgwater to Land’s End I quite enjoyed waving to people who stopped and stared at the old Ambulance passing by. On the return leg it was different: first there was a puncture, then the engine started to play up, and finally the exhaust developed a large hole in it, so I was glad to see the Bridgwater sign.

I spent about a week or so repairing the Ambulance with a new exhaust box and two new tyres. The engine was more problematic - it took me ages to work out why it kept spluttering and losing power. Finally by process of elimination I found the petrol tank had been contaminated with either rust or sand and was clogging up the carburettor thus starving the engine of fuel. Now with the Ambulance fitted with a fuel filter and its petrol tank cleaned, I started to think of the next leg, Bridgwater to John O’Groats and back, and also count my blessings that these problems hadn’t occurred somewhere in the remote parts of Scotland.

As I said at the beginning, the weather was being watched for the best time to attempt the journey. It was still snowing in the highlands of Scotland and I needed a window of opportunity to go on the second leg. Some may say, “Why not wait for summer?” - my ideal was to attempt the journey in the early part of the year so that the temperature would be lower. This would help keep the engine cooler as engines of that age were not designed to cool themselves as well as modern ones.

Finally the window of opportunity came and I set off carrying spares and food. The first day went well and the weather was good. Traffic was light and I made good headway: after seven hours and three hundred miles of driving I arrived on the Scottish border and parked for the night. I used the Ambulance as a mobile home - the bed was quite comfortable. I had a good night’s sleep only to wake to the Ambulance surrounded by local people who were wondering where this old Ambulance had come from.

The second day was just as good - weather fine and traffic light. The trip through the mountains was quite splendid. The snow line was level with the road but not on it; at one time I could see both the sun and the moon, and as night fell which was about one hour early in that part of Scotland, the light on the mountains was quite eerie. I made just short of Inverness that night. The Ambulance was going great and by then I started to relax and enjoy it.

The third day I reached John O Groat’s around dinner time with no problems, took some photos and chatted with the locals and had the Ambulance pictured outside the local coffee shop so they could put it on their website.

I started the journey back at about three in the afternoon after offering a lift to a fellow traveller who want a ride back to the nearest large town, which was Thurso - and he enjoyed the ride. From Thurso I set off again, hoping to get to Nettle Bridge which is south of Inverness, where I knew I could get a great breakfast in a golf club in the morning. Night fell and I found myself getting quite tired so I stopped for a rest and wondered if I should stay the night there or go on. I decided to do the last sixty miles on to Nettle Bridge.

I found on the way up that it was better to travel in the early morning and early evening to avoid holding up traffic, as I was only capable of about forty-five miles per hour top speed, and long queues were forming behind me on single carriageways, and I had a few people wave at me for the wrong reasons.

After a good night’s sleep in Nettle Bridge and a good breakfast I decided to stay and look around the area for a few hours to give me more time to rest, and later that day set off for the border taking the A9 south though the snow-capped mountains. The weather had got quite bad: it started to snow, and there were gale-force winds for about seventy miles. On the other side of the mountains the weather became a lot better with some showers and light winds. All was going great until about fifteen miles north of Perth when the exhaust came off and the Ambulance was making a horrible noise. I pulled into an industrial park where a garage mechanic put it on a ramp so he could see where it was damaged or had come off, and told me to come back in about an hour, which I did after going downtown and getting a paper.

When I got back to the garage not only was the Ambulance fixed but there was a crowd of people who had come to see this vintage vehicle. Having spent about an hour talking with them, I went to pay the garage mechanic and to my astonishment he would not let me pay: “On the house!” he said, “Anybody who drives a vehicle like that from one end of the country to the other needs all the help he can get.” With that I went to the local shop and bought him some flowers for his wife and a bottle of wine for him, and went back to the garage to give it to him. In his Scottish voice he said, “’Ark I’ll not take both those home in the same week laddie - she will think I’m going soft. I’ll take the flowers today and the wine next week, thank you!” With that, off I went, heading south on the way to the border.

Having spent a night on the border, I set off down the M6 to the M5 all the way to Bridgwater for home. This was uneventful other than I had an Ambulance on a blue light run slow on the M5 as they passed so they could take a photo!

Now I’m going to have a well-earned rest before I attempt the third challenge with a Police car, which I have already bought. 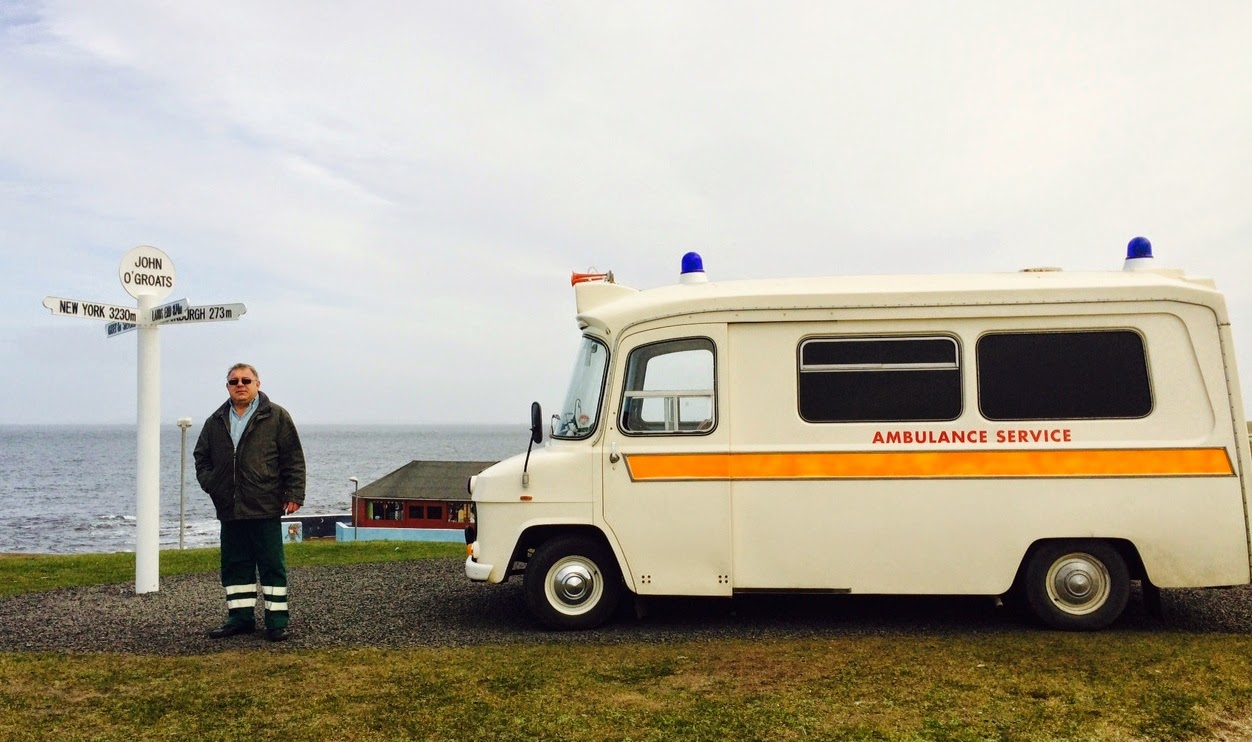