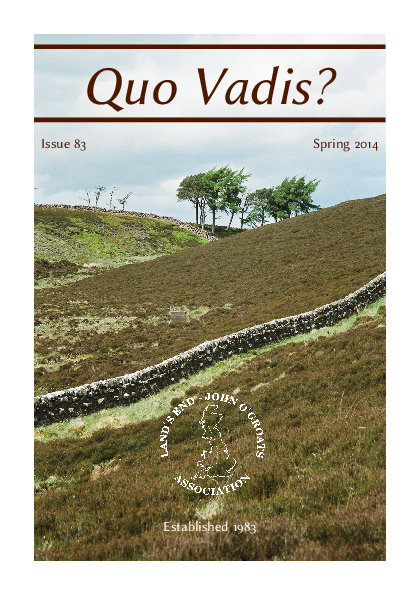 Five members made a guess at the location of my photograph on our Spring Issue cover. I must confess that until a few weeks ago, it was a mystery even to me. I chose it for its design merit and didn't work out where I was until the time came to reveal the answer here. I walked LEJOG in 2007, unplugged, (meaning: I didn't blog, Facebook or Twitter my progress); I was also retro enough to still be using a film camera, so I had no GPS record from a nifty digital machine. However, thanks to a good old-fashioned pencil and notebook, I could look up, 7 years later, that I took the photo on 26th May between Carlops and Balerno, just south of Edinburgh. This route takes you through the Pentland Hills Regional Park, and if walking north, the scene is somewhere beyond North Esk Reservoir. I used the mostly off-road route of Andrew McCloy as described in his book, The Land's End to John O'Groats Walk: A Guide to Planning the Ultimate Footpath Walking Adventure.

Without further ado, here are your educated guesses:

Geoff De'Ath:
I think it might be in Cumbria (Lake District). Anyway, wherever, it’s an attractive picture.

Eddie Sedgemore:
I'm going to guess that the photo was taken somewhere on the Pennine Way, which is rather a vague answer as the Pennine Way is more than 200 miles long. Oh well, at least I tried!

Krister Andrén:
I do not know where you took the picture but I have seen similar views in Northumbria and elsewhere.

Shirley Rippin:
As soon as I saw it I though 'that's Northumberland'. I may be wrong but when I re-read your report on your walk and saw that you used Hamish Brown's book - and my book, One Woman's Walk (thanks for that!) I guessed you must have gone that way through the Cheviots. I don't think many cyclists are going to use that route! As I say, I may be wrong but I'm thinking it may be taken somewhere in the Coquet area or near Woden Hill Fort.

Cliff Harrison:
I have gazed at the cover picture, studied Wainwright and looked through my pictures of our walk. The conclusion is, I haven't a clue. But I will have a couple of guesses: between Baldersdale & Middleton, or: near Gargrave.
When we walked the Pennine Way we had beautiful weather until we reached Horton In Ribblesdale. We arrived in a heat-wave, but the next morning we awakened to a blizzard. Not to be deterred, we set off across the moors (we were made of 'stern stuff') which was foolish, but we did survive obviously. The bad weather continued until Alston.