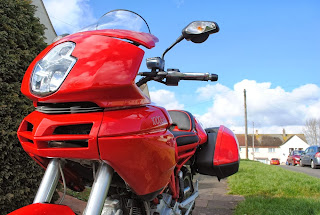 I had wanted to do something for Cancer Research for a few years now as both my sister and mother were survivors of the disease and it had taken my uncle when I was a child, however could never really decide what to do.  During November 2012 a friend was also taken by the disease and this was followed by a further friend who was diagnosed in January.  This was the catalyst that made me think that the time was now.

I had looked into the normal fundraising events but none of them could raise the kind of funds I was looking for, it was then I stumbled upon the LEJOG Association website and as this was something I had always be interested in doing, I thought why not and set myself up a just giving page and decided that I was going to do the trip in a single day on my 2003 Ducati motorbike with no support apart from a small section from Bridgewater to Oakhampton. 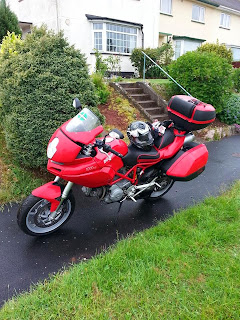 I proceeded to plan the trip and thought that the best thing to do was spend three days riding up to John O'Groats using the route I was planning in order to learn as much as I could and then be as prepared as I could have been.


The trip began on the 12th June 2013 with the first leg to Wolverhampton (My home town), day two was to Perth, and day three to John O'Groats.  One thing I didn't consider was how tiring the trip up would be, but I had a goal and I was damned if I was going to give up.  One thing that struck me on the way up was people's interest in the trip and how friendly people were. 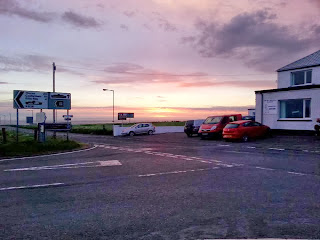 So the day began, I started out at 03:58 in the morning, I can remember looking at the sun rise and thinking "what the hell am I doing", I put a quick note on Facebook and I was on my way.  Within ten minutes, the rain started, and didn't let up till Inverness, making the A99 and A9 a quite interesting ride, in fact, I didn't see another car until the bridge over the Cromarty Firth, quite surreal!

I stopped at Skiatch Services in Inverness for Fuel and a flask/biscuit break and set off again with the Cairngorms in my sights, the weather cleared and I looked forward to a lovely ride across the Cairngorms, unfortunately, the higher up I got, the worse the weather got. I had rain, Sleet, Fog, Hail and at one point, thunder and sleet, another bike had decided to tail me across the park due to the conditions and once we got across, we shook hands and went our separate ways.  I stopped again in Perth at about 09:30 and had a cuppa and attempted to dry some of my kit and change other bits, I also took the time to phone home and let them know how it was going, only to be informed that the weather was going to be awful until the lake district, still I had no choice but to press on.

The weather continued to be awful and that kept speeds low and I dropped behind schedule by approximately 2 hours.  I pressed on till Preston Services but at this point, I began to feel quite ill and low, to such an extent that I called my wife in the firm belief that I couldn't do it and I was going to cause an accident due to my tiredness, after a long chat, I went into the services and brought a coffee and two cans of Red Bull (which apparently gives you wings) and waited for them to kick in.  It was then I saw two cars reverse out of opposite spaces in the car park right into each other, and I decided, that it was time to keep going as I was going to be seeing my family in Cornwall.

The motorway journey was pretty boring with nothing much to do other than eat up the miles and think about things, before I knew it, it was 15:00 and I was getting close to Birmingham and in my view I was nearly home.  I stopped at Frankly on the M5 and updated Facebook, had another Red Bull and contacted family and friends and I was on my way again, with the next stop being Bridgewater and my best friend was meeting me there to take some pics and escort me to Exeter where another friend was waiting. 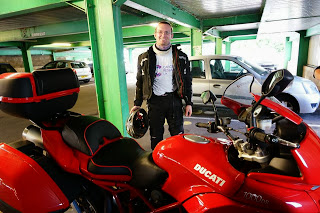 I met up with Paul and Saara and they brought me a flask of tea with a proper cup and a plethora of sweets which was most welcome and at the time quite emotional for me.  They followed me to Exeter and took some pictures of me riding along, and we then met with my other friends who were on a motorbike and planned to ride with me to Oakhampton.  My friends swapped over and we got going again, by this time, I was exhausted and hurting with my neck and left arm providing serious concern as I couldn't feel my thumb.  I got to Oakhampton, shook hands with my friends and in their words, I took off towards Cornwall. 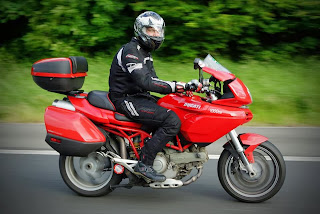 By now I had only one target, get there and see my wife, in laws and three year old at Loggons Moor in Hayle on the A38, and they would come with me to the end.  All the way through this ride I had a MP3 player on an intercom system and as I arrived in Hayle with Loggons moor in sight, the music from my wedding came on, which promptly reduced me to tears.  I met up with the family and we head of towards Lands End,  I have to admit, I would have struggled with the roads as they are quite twisty and my concentration was fading.

Well the last two miles were probably the longest of my life and when I go to the end, I really did not know what to do or think, I was in pain but totally blown away by it all.  Thankfully the hotel was still manned as there was a wedding on, and a very kind porter let me go around to the post at the back and I got a photo underneath it. 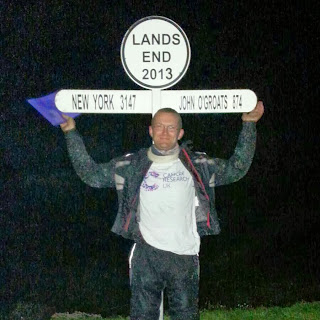 I had done it, 19 hours in the saddle, all I wanted to do was sleep and spend some time with the family, all I needed to do was get back to Hayle where I had booked a caravan for a week.  The rest is history.  I raised over £1500 for Cancer Research and I am now thinking of what I could do next, not sure how I could top this though. 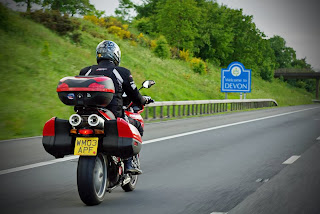 One of my inspirations for this Trip Helen Bradley passed away on the 8th January from Cancer; I have since decided to dedicate the whole trip to her.
Posted by Katharine at 15:11